April 21st 2001 Glassbond and its personnel were accorded the prestigious Queens Award for Enterprise, which acknowledges the achievement of 6 consecutive years of exceptional growth in export sales.
Presentation of the Award was a two part process, initially with the presentation of the actual award by the Lord Lieutenant for Merseyside, the Queens official representative for this area.
This Presentation took place at St Helens Chamber of Commerce after which Glassbond arrange a celebratory drinks reception for all Glassbond employees along with Chamber leaders and local dignitaries. 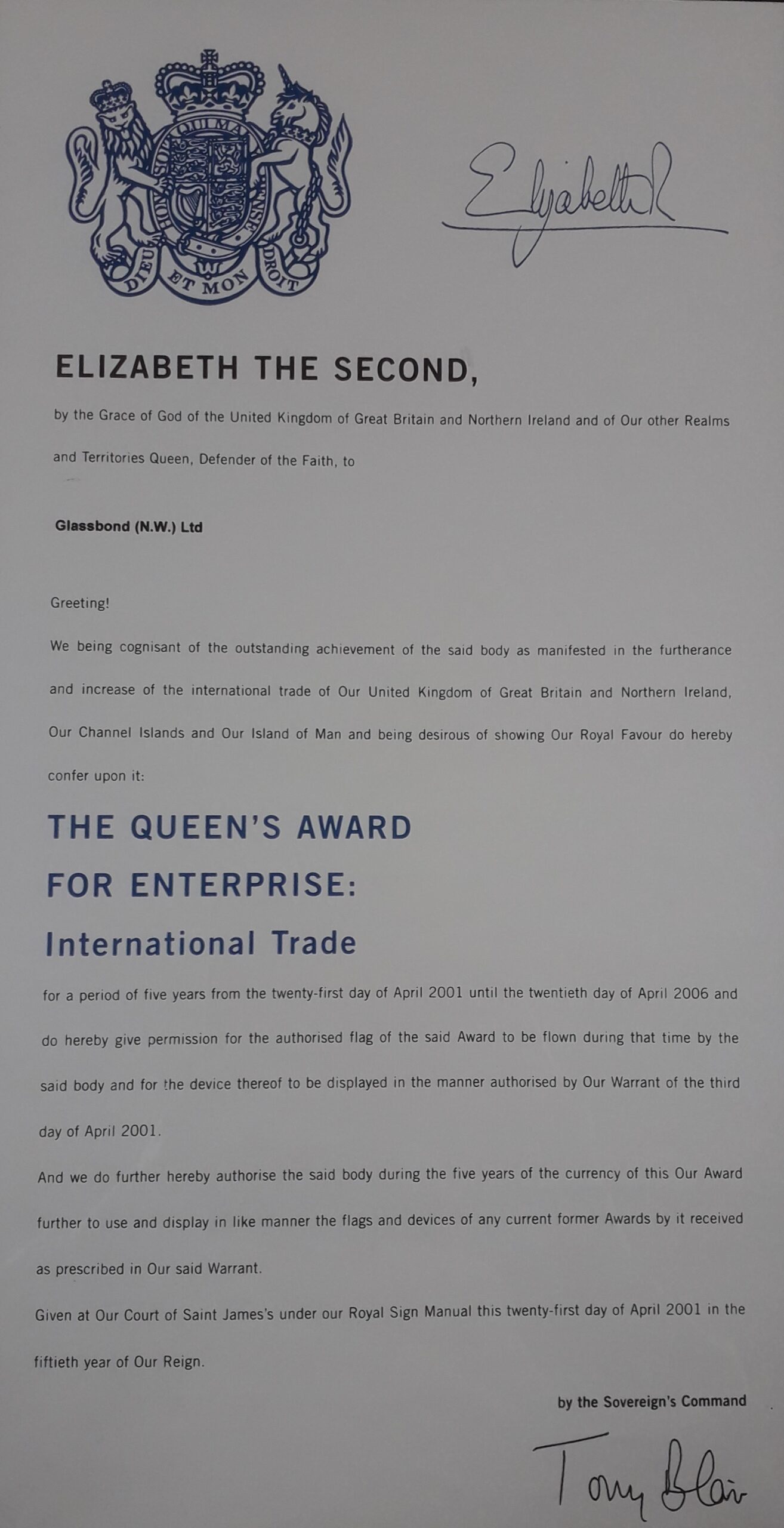 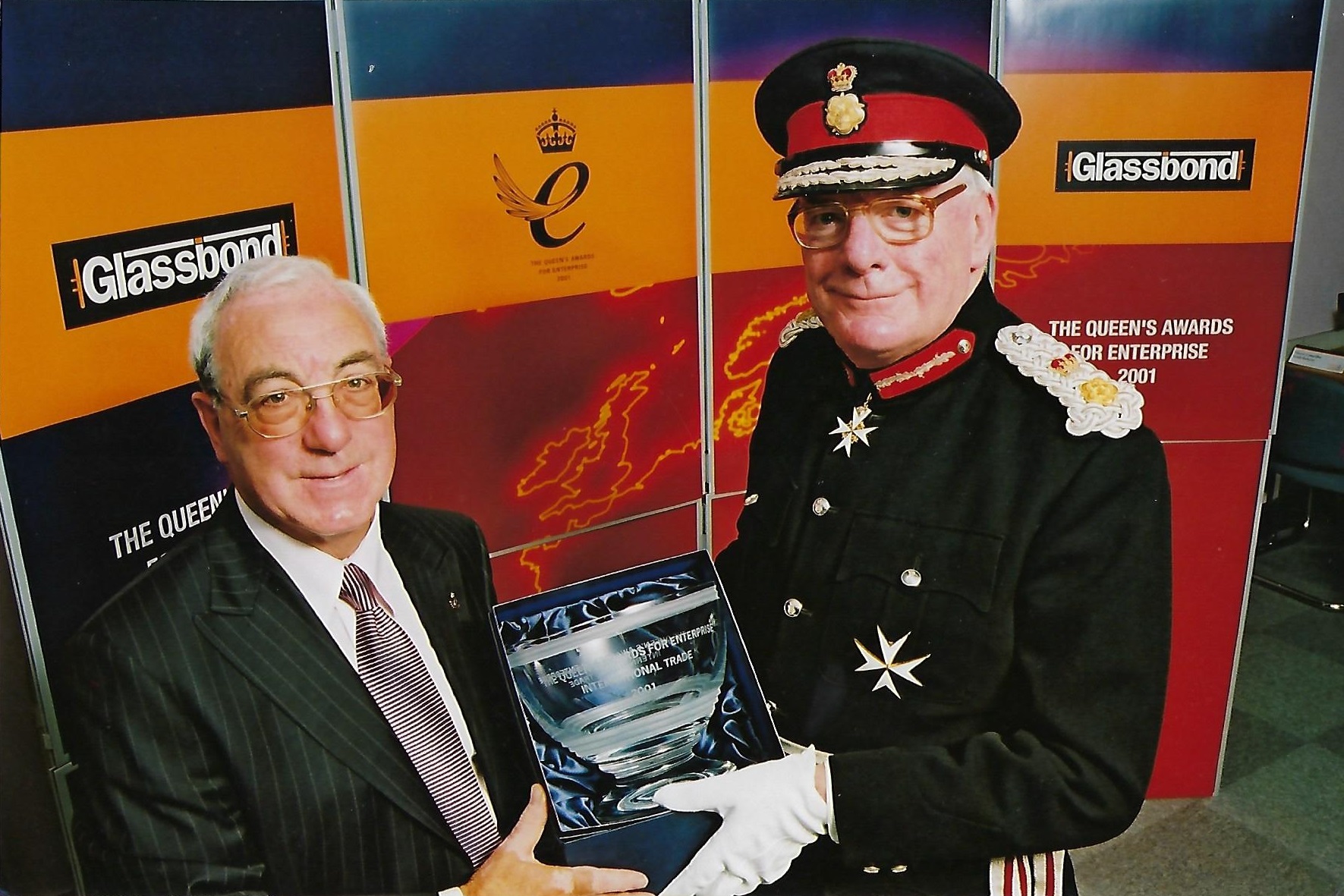 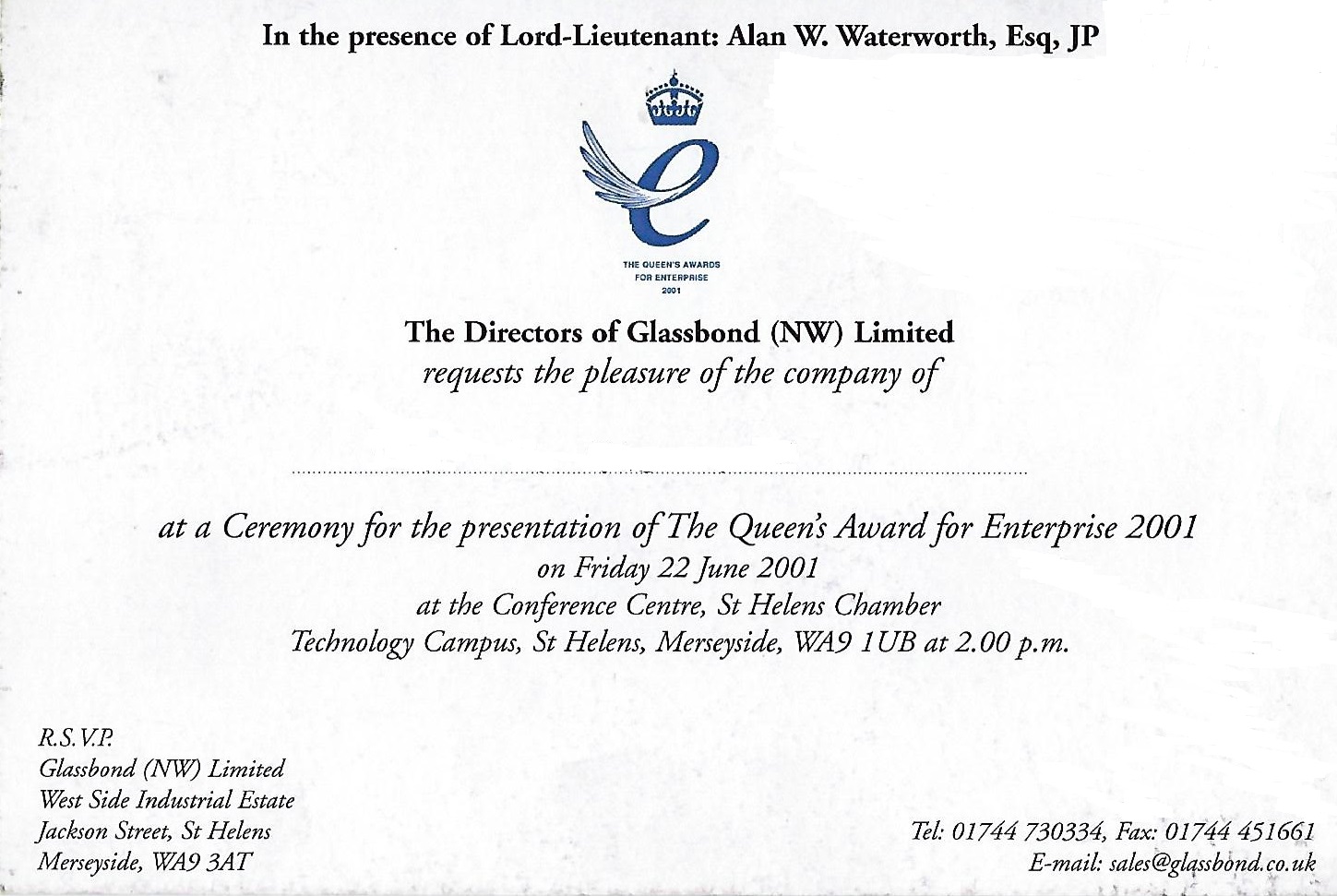 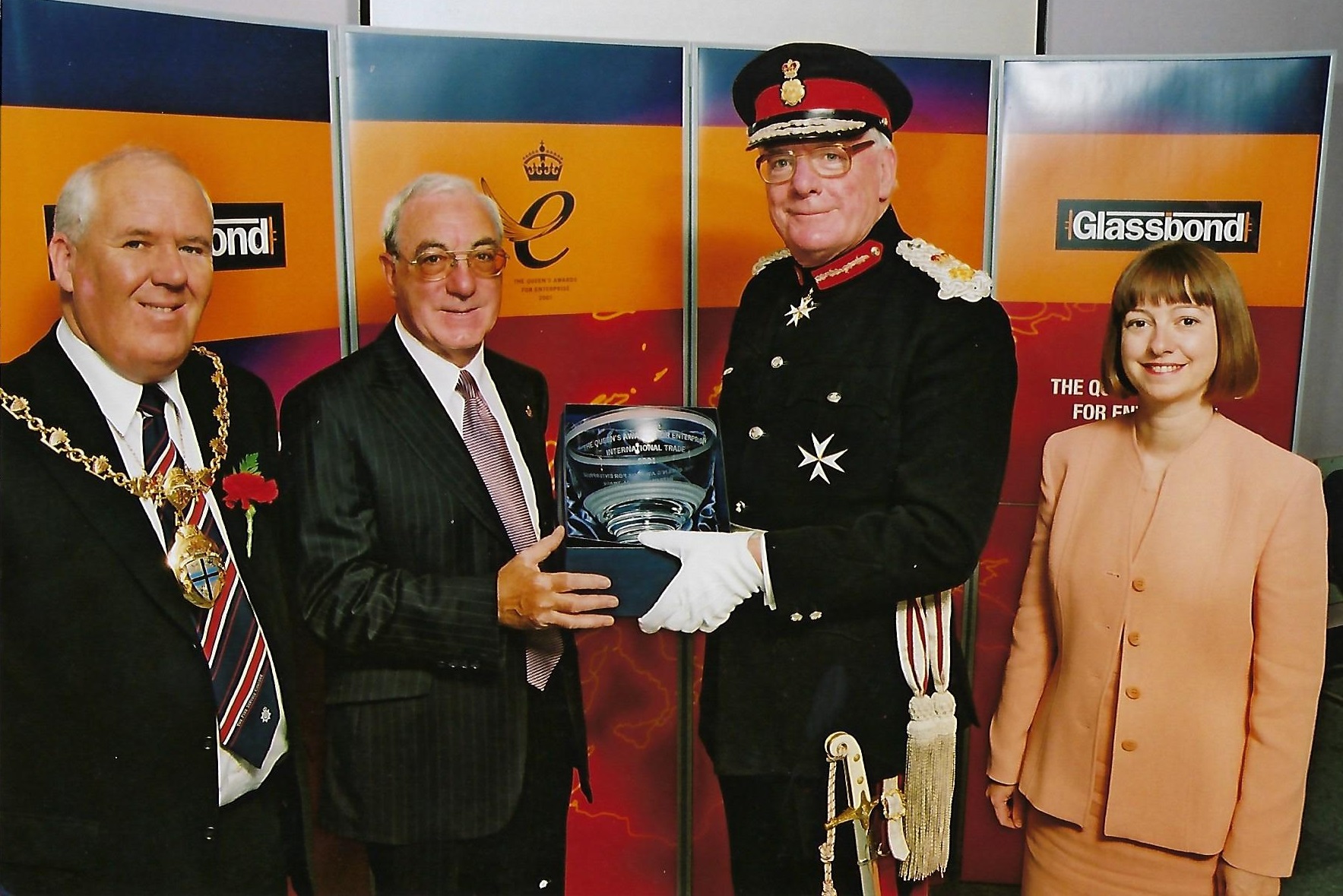 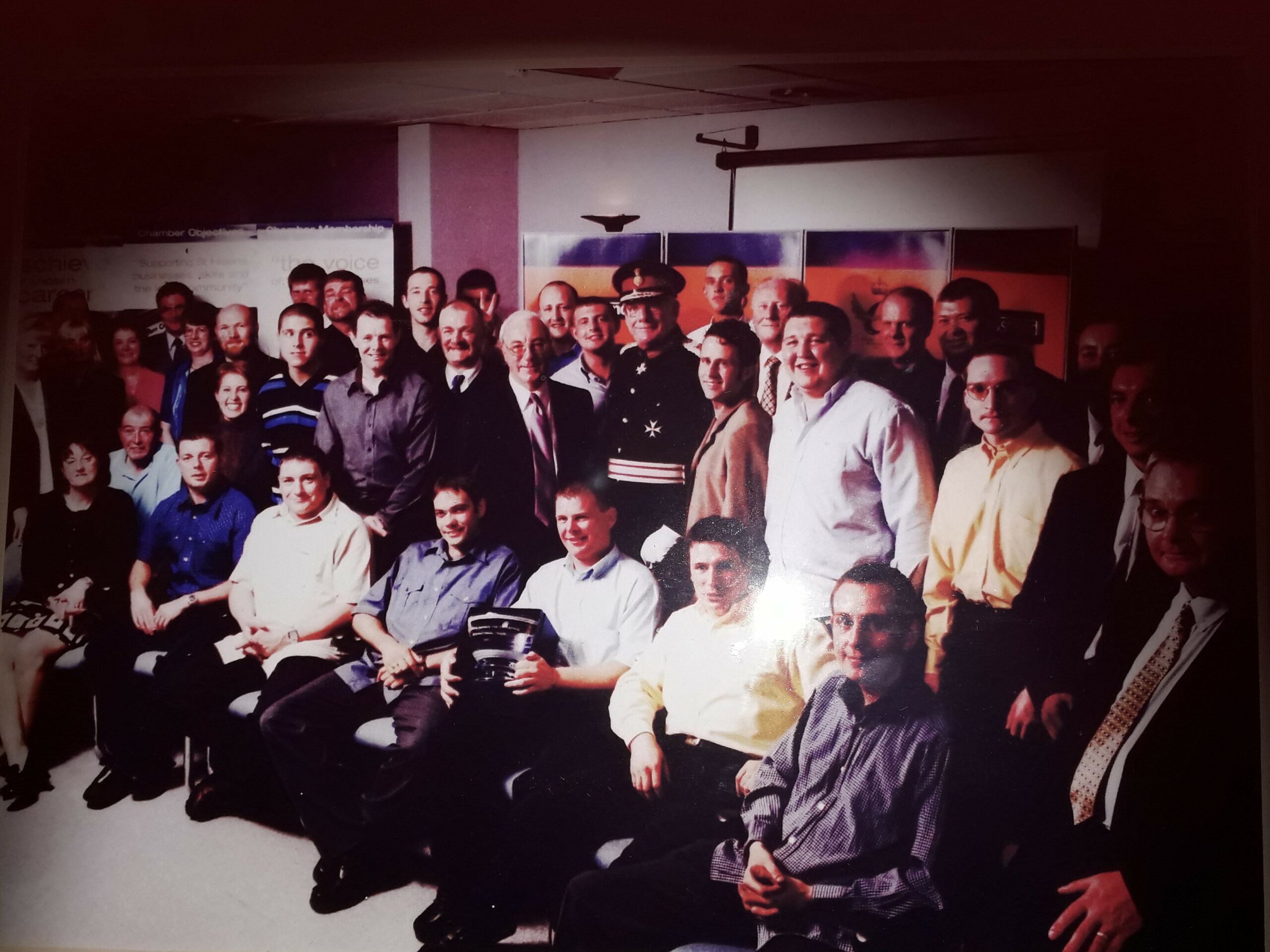 This was followed later that year with an invitation for a number of Glassbond employees to visit Buckingham Palace to meet the Queen and Prince Philip and to attend a UK export Trade initiative in the Palace.
Attended by Philip Randell, Joe Worsley, Marie Mitsiaris and Norman Heyes, we set off by train in the morning and reach our hotel which had views of the palace from several of the rooms late afternoon.

We had little time to enjoy the views of London with taxis arriving to take us to the Palace for 6.30pm. Special passes having been issued to us in advance to allow us to gain entry to the Palace.
We were greeted by palace personnel and ushered along with other award winners to a reception room for drinks and canapes, after which we were introduced to the Queen and Prince Philip.

Prince Philip inquired as to our company products and was particularly interested to note that we supplied Bell lighting who at that time were the official supplier of light bulbs to her Majesty the Queen.
After the royal couple left the reception, there was a presentation from former Award winners with stands and displays of their innovations and export successes.
During this ‘walk round’ we were engaged in conversation by a number of Politicians, Government and trade body representatives and several more members of the royal family.

Whilst enjoyable and a great experience, I have to admit to being a little nervous and slightly apprehensive as to what to say to all these important people.

I recall being greeted and engaged in conversation by a considerable number of government/royal persons, many of whom we as a group did not initially recognise.
Not wanting to admit this, we were initially left wondering to whom we have just spoken. However fortunately for us, the reception was being held in the Royal portrait gallery.
We were able therefore (after much discussion between ourselves) to distinguish royals from politicians from the paintings in the room.

Later in the evening once most of the Politicians and members of the Royal family had left, we were able to relax a little more and one of the Palace foot men offered to show us a number of other Palace reception rooms.
However what we saw and where we ventured in the Palace will remain forever secret………….

Here’s to another 20 more years of ongoing sales success and product innovation!